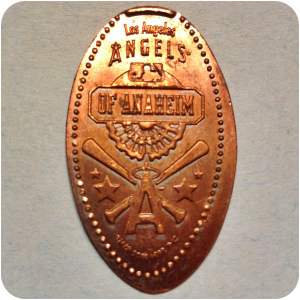 Anaheim Stadium1 had been the home of the Angels since their move from Los Angeles following the 1965 season. The stadium opened April 9, 1966, as the California Angels hosted the San Francisco Giants in an exhibition game. The franchise’s first American League game was April 19, 1966 vs. the Chicago White Sox. Prior to Anaheim Stadium, the Los Angeles Angels played at Wrigley Field in 1961 (Wrigley Field in Los Angeles was demolished in 1969) and Chavez Ravine from 1962-65.

The machine is outside the Team Store by Section 120. The Angels Team Store is open Monday-Saturday from 10:00 a.m. – 5:00 p.m and during all games. Closed on Sunday except on game days. Parking on game days is $10.00. Four designs available from an hand cranked PennyCollector machine . Each cost 50 cents (2 quarters only) on a penny that you supply. All four designs have the ‘A’ with a halo:
1. (V) A batter and 4 stars with ‘Angels’.
2. (H) Albert Pujols throwing a ball with #5, his name, and signature.
3. (H) An A on each side of an aeiral view of the stadium with ‘Angel Stadium of Anaheim’.
4. (H) Haloed A surrounded by ‘Angels Baseball 1961’.