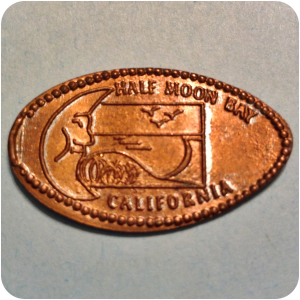 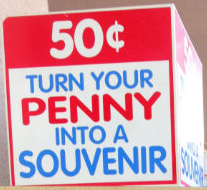 The machine1 is located just inside front door of pub. The pub opens at 4pm most days, so don’t arrive too early. They also have a change machine for quarters in their little arcade, and very good food if you need a place for lunch.

Design is of a crescent moon, pumpkins and says “Half Moon Bay, California”.

The Inn2 was built about 100 years ago and has quite a history. At least three times since the turn of the century it has been a house of ill repute or a house of fun depending on where you grew up and what you learned to call those places where ladies of the night lived. During the “Roaring Twenties,” Al Capone’s sister allegedly became involved in the Inn and reportedly owned the slot machines in play.

Bootleggers used to make their brew far back in the coastal canyons and then take it to the Inn, where it was shipped to San Francisco. There are still people who can recall bullets flying across Highway 1, as highjackers fought it out with the bootleggers over who would get the booze. Three murders took place at the Inn in the 1930′s. Two of them occurred when three escaped convicts from San Quentin ended up at the Inn and had an argument. One of the convicts shot and killed the other two. Not much could be learned about the third murder, except that it involved a woman.

During World War II the Army took over the Inn. They used it as a mess hall and converted the upstairs portion into officer’s quarters. The Army also added the back part that is now used as a bar and game area.

In the late 40′s, some residents recall drinking in the back part of the Inn while drunken bartenders took turns shooting pistols at targets set up on the wall opposite the bar. In the 50′s, several people reported having their first beer at the Inn several years before the age of 21. It was that kind of place.

In the 60′s, the Hell’s Angels motorcycle gang allegedly stopped at the Inn for a drink. The Angels were reportedly in a hurry and therefore rode the cycles into the bar itself.

Cameron Palmer, owner of the building, now owns the Inn, pub and restaurant and hopes to establish new traditions. 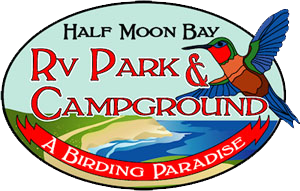 Half Moon Bay RV Park and Campground offers all the amenities and services to make your stay on the Northern California coastside the best! It’s a family owned campground that has the friendliest customer service on the coastside. Everything you need for your RV setup is right here along with plenty of space and fire pits. Check-in at Cameron’s Restaurant & Inn.