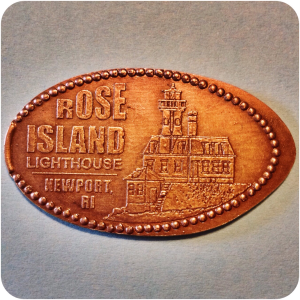 One of a group of New England lighthouses built to an award-winning design by Vermont architect Albert Dow, Rose Island Light has sisters at Sabin Point, Pomham Rocks, and Colchester Reef. The lighthouse stands atop a bastion of Fort Hamilton, which was built in 1798-1800.

The building was abandoned as a functioning lighthouse in 1970, when the Newport Bridge was constructed nearby. In 1984, the Rose Island Lighthouse Foundation was founded to restore the dilapidated light on behalf of the City of Newport, which had received it for free from the United States government. In 1987, the federal government listed the lighthouse on the National Register of Historic Places. In 1992 it was relit as a private aid to navigation.

The lighthouse is today a travel destination, reached only by boat. For a fee to the Foundation, visitors can spend a night as a guest or a week as the “lighthouse keeper,” completing many of the chores required to keep the lighthouse in good condition.

There is one machine2 at this location. The girl behind the counter stated that there was always only one at this location for the last 5 years. The other machine is on Rose Island where you need to take a ferry. Machine is located outside on the sidewalk.