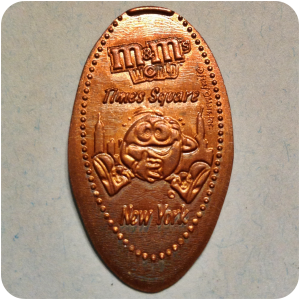 
This circulated coin is cleaned, shows wear and tear and is pressed on a copper-plated zinc penny.

Positioned in the heart of Broadway, M&M’s World® Times Square2 is officially the hottest performance in town! Nothing brings more flavor to Manhattan than this two-story color wall packed with THOUSANDS of your favorite Milk, Peanut and Specialty M&M’s® Candies. Melting inside? Our Color Mood Analyzer will prove that you’re not the only one feeling the excitement.

In 2012 M&M’S® World New York launched the Personalized Printer, which will allow guests to create customized M&M’S® right in the store. Store visitors can select from a variety of images, as well as create customized messages that will be printed on M&M’S® Brand Milk Chocolate Candies in about two minutes.

Guests can choose from 15 different colors and one mix blend, as well as select two images and create two customized messages to feature on their personalized M&M’S® blend. People will be able to select from an array of clip art images, including the “big apple,” “I Love NY,” the Statue of Liberty, as well as the New York Giants, New York Jets, New York Yankees and New York Mets logos, among others.

Times Square3 is a major commercial intersection and a neighborhood in Midtown Manhattan, New York City, at the junction of Broadway (now converted into a pedestrian plaza) and Seventh Avenue and stretching from West 42nd to West 47th Streets. Times Square – iconified as “The Crossroads of the World”, “The Center of the Universe”, and the “The Great White Way” – is the brightly illuminated hub of the Broadway Theater District, one of the world’s busiest pedestrian intersections, and a major center of the world’s entertainment industry. According to Travel + Leisure magazine’s October 2011 survey, Times Square is the world’s most visited tourist attraction, hosting over 39 million visitors annually. Approximately a third of a million people pass through Times Square daily, many of whom are either tourists or people working in the area.