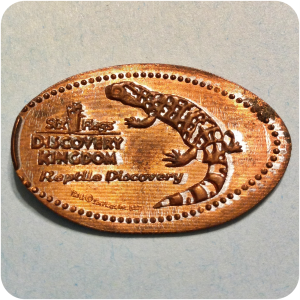 In 2008, there were 5 new Pennycollector 4 design hand crank machines installed here at Six Flags Discovery Kingdom.1 All other machines were Retired.

Six Flags Discovery Kingdom2 (formerly known as Six Flags Marine World, Marine World, The New Marine World Theme Park, and Marine World Africa USA) is a 135 acres (55 ha) animal theme park located in Vallejo, California. The park includes a variety of roller coasters and other amusement rides, along with a collection of animal exhibits and shows. It has been part of the Six Flags chain of amusement parks since 1999.

Not for the squeamish, Reptile Discovery3 is home to snakes, lizards, turtles and other slithery superstars.