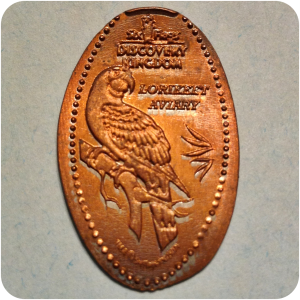 In 2008, there were 5 new Pennycollector 4 design hand crank machines installed here at Six Flags Discovery Kingdom.1 All other machines were Retired.

Six Flags Discovery Kingdom2 (formerly known as Six Flags Marine World, Marine World, The New Marine World Theme Park, and Marine World Africa USA) is a 135 acres (55 ha) animal theme park located in Vallejo, California. The park includes a variety of roller coasters and other amusement rides, along with a collection of animal exhibits and shows. It has been part of the Six Flags chain of amusement parks since 1999.

Walk amongst brightly colored birds – and give them a little snack – in the Lorikeet Aviary.3 Additional fee required.

The Lorikeet Aviary is located in Tava’s Jungleland. The Interactive Lorikeet exhibit allows visitors to get up close and personal.

The birds come in a dazzling rainbow of colors – a camoflague among the colorful flowers in their native environments.

Lorikeets are naturally found in rainforests and woodlands, but also in wooded urban areas, where they primarily feed on the nectars of various blossoms and fruits.