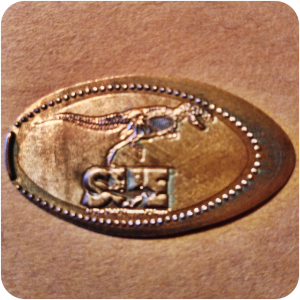 The Field Museum of Natural History1 is located in Chicago, Illinois.
It sits on Lake Shore Drive next to Lake Michigan, part of a scenic complex known as the Museum Campus Chicago.
The Museum collections contain over 21 million specimens, of which only a small portion are ever on display.
Some prized exhibits in The Field Museum include:

The main exhibit with these artifacts reopened as Ancient Americas in March 2007. You must pay admission to get to the machines.

To clarify, there are 2 machines on the ground level, each with 8 designs (these are electronic machines where you select your design from a touch screen). The touch screen display also guides users step-by-step in your choice of English or Spanish (which is helpful because all three coins are inserted into the same slot). There are a total of 16 designs at the museum (that we were able to find) – 8 Egypt theme and 8 dinosaur theme. The price is 51 cents.

The world-famous fossil known as “Sue”2 is the largest, best-preserved, and most complete Tyrannosaurus rex ever found. Sue measures 42 feet long from snout to tail and 13 feet tall at the hip. She boasts 58 dagger-like teeth and cuts a fine figure as the Museum’s most popular backdrop for visitor photos. A replica skull crowns the skeleton in Stanley Field Hall, while Sue’s original skull, which weighs 600 pounds, rests within an exhibition on the Museum’s balcony, under a mural depicting this majestic creature in the flesh.

Machines numbered 1 to 16, have been Retired.

The Field Museum also has its own Penny Collector Souvenir Coin Album, which is sold at all the Gift Shops for $5.95. The Coin Album comes with a Tyrannosaurus Rex penny, which reads “The Field Museum”