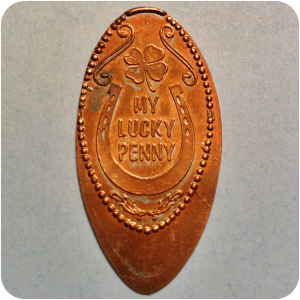 On the other side of the freeway from Arizona Mills Mall. Drive into the resort about a 1/4 mile. The Rustler’s Rooste1 restaurant is up on a hill. The machine, an Uncommon Cents 4-die hand-cranked machine, is in the gift shop, downstairs near the exit and by the restrooms. They are open from 5 – 10 nightly.

Rustler’s Rooste2 was established in 1971. The legend goes that the original site, atop a butte in the foothills of South Mountain, was a hideout for cattle rustlers. Today, it is Arizona’s Legendary Cowboy Steakhouse. It is located 15 minutes from downtown Phoenix and Tempe, 20 minutes from Scottsdale and 10 minutes from the airport.

Rustler’s Rooste is a 2-story building with our lounge on the top level. Stroll over the indoor waterfall and take the slide into the dining room.(for the faint of heart, there is a staircase). Both areas are bordered on the north side by large plate glass windows that provide an unparalleled view of the city lights.

Why Is Finding a Penny Good Luck?3

“Find a penny, pick it up. All day long, you’ll have good luck.” This common rhyme refers to an old superstition, and like many superstitions, it has many variations and the reasoning behind those variations are also numerous. Reasons why finding pennies brings good luck range from early beliefs about where metal came from to the notion that money symbolizes power.

Bad things can happen to good people when they least expect it. As a result, people tend to fall back on ancient rituals that seem to stave off disaster. That is, they believe in superstitions. Many superstitions seem to revolve around the struggle between good and evil, and these rituals were designed to swing the balance onto the side of good.

Finding a penny and picking it up is a relatively new spin on an old superstition. Many years ago, people believed that metal was a gift from the gods, given to man for protection against evil. That developed into the notion that metal brings good luck. In fact, this idea is partially represented in the practice of hanging horseshoes over their doorways, wearing charm bracelets, and carrying good luck coins.