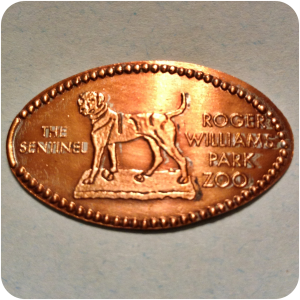 The Roger Williams Park Zoo1 houses over 1000 animals of more than 130 species in naturalistic settings. The park and zoo are named after the founder of Providence, Roger Williams, the 17th-century proponent of religious tolerance.
The zoo was founded in 1872, and is considered to be the third-oldest zoo in the nation. The zoo was closed from 1978 to 1980 for renovations. It is now recognized as one of the finest zoos in the United States.
The zoo began a renovation program in 2008, which included expansions to its polar bear exhibit, the ‘Hidden Zoo’ veterinary hospital and clinic, and a children’s adventure trail. A seasonal butterfly exhibit was introduced in the summer of 2009.

People are not the only ones that are remembered through sculpture. Late one night in 1849, sculptor Thomas Frederick Hoppin woke to the barking of his dog Black Prince. Because of the family dog, the Hoppins were able to escape the fire burning the house. The Sentinel was created two years later to honor Black Prince. Initially located in front of the artist’s home, it was later donated to the City of Providence and rests within the Roger Williams Park Zoo.

Be the first to review “Retired The Sentinel at the Roger Williams Park Zoo, Providence, RI Rhode Island” Cancel reply