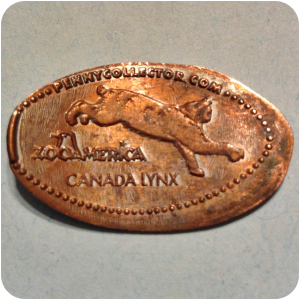 ZooAmerica1 is located in Hershey, Pennsylvania near Hershey Park and it first opened in 1910. ZooAmerica has an area of 11 acres in order to house its 200 animals featuring 75 different species.
ZooAmerica is typically open 10:00 am – 8:00 pm. The admission price (2013) for the ZooAmerica is $9 for children, $9 for senior citizens, and $11 for adults.

The second largest forest left in the world is the northern evergreen forest stretching from Newfoundland across Canada into Alaska. Animals of the North Woods face long, frigid winters and short summers which arrive abruptly in June, bringing swarms of tormenting mosquitoes. Unpredictable food sources and the harsh climate create variations in reproduction not seen in animals from more southern regions.

Biography: A Canada lynx is a medium-sized cat that is well adapted for life in the northern forests. Compared to the more common bobcat, a lynx is larger and has long black ear tufts, a black-tipped tail, and a flared facial ruff. With long legs and huge furry feet that act like snowshoes, a lynx can move tirelessly across deep snow while hunting its preferred prey, snowshoe hares. Lynx numbers rise and fall following the cyclic highs and lows of the snowshoe hare population. Ideal lynx habitat is a mixture of forest types. Downed logs and woody debris of old forests are needed for denning, escape, and protection from severe weather. The solitary lynx hunts in young forests that provide habitat for prey. Corridors of forest, with enough cover, allow the shy lynx to travel safely within its range.

Canada lynx are found in the high elevations and mountainous regions of northern United States and Canada. Although their numbers are stable in Alaska and Canada, habitat destruction has led to a decline in the lynx population in the contiguous United States. The Canada lynx was listed as a threatened species, in the lower 48 states, under the Endangered Species Act in March of 2000.