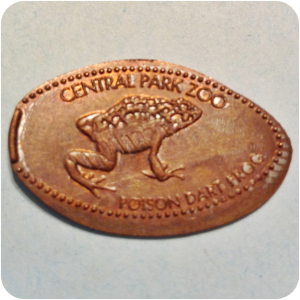 The Central Park Zoo1 is a small 6.5-acre (2.6 ha) zoo located on Central Park in New York City. It is part of an integrated system of four zoos and the New York Aquarium managed by the Wildlife Conservation Society (WCS), and is accredited by the Association of Zoos and Aquariums (AZA).

The zoo began in the 1860s as a menagerie, making it the first official zoo to open in New York. The zoo was modified in 1934, with the addition of many new buildings ranged in a quadrangle around the sea lion pool. (The zoo from this era has been commonly known as the “1934 Zoo” or “Robert Moses Zoo”.) Finally, the zoo was renovated in the mid-1980s and reopened in 1988, replacing the old-fashioned cages with naturalistic environments.

There are approximately 170 species of Dart Poison Frogs2 . Most are terrestrial and active during the day. They move about the forest floor and climb vegetation growing on tree trunks. With their short, but strong hind limbs, they are agile climbers and jumpers. They are not generally known for their swimming skills, however, and they rarely venture into the water.

Many dart poison frogs have complex social lives that include a variety of territorial, courtship, and parenting routines. When they are guarding their turf, they will call, chase, and even wrestle with intruders. Many species work in pairs to raise their young.