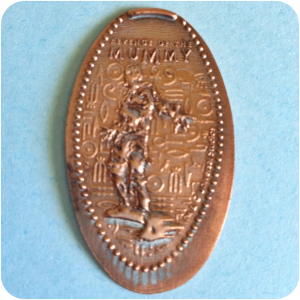 Revenge of the Mummy2, commonly referred to as the Mummy Ride, is an enclosed steel roller coaster based upon the popular Mummy movie franchise directed by Stephen Sommers. The rides are located at Universal Studios Florida, Universal Studios Hollywood, and Universal Studios Singapore and use linear induction motors (LIMs) to launch riders from a complete standstill to a top speed of between 40 and 45 miles per hour (64 and 72 km/h) in a matter of seconds.

Many of the Egyptian hieroglyphics3 on the walls spell out real words and ancient warnings.