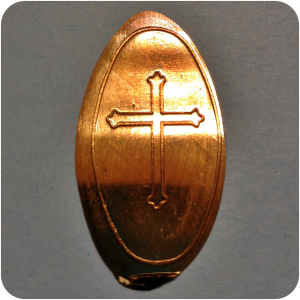 The Budded Cross3 also known as the Apostles’ Cross, the Treflée, Botonée or Cathedral Cross may have a long stem or all four arms may have the same length. There may be one bud or several. The arm edges may be straight or convex. The arm ends may be straight, convex or concave… and innumerable other variations.

There is a huge variety of Budded Cross styles, all with slightly different meanings, to suit whatever purpose the church or other organisation may wish to convey.

The discs or circles at the ends of the arms may be spherical or rings, but in artwork they are usually assumed to be two-dimensional solid discs.

The Pagan use of the Celtic Cross is well known, where the circle or disc represented the sun. It is believed that design was copied by the early Christians in Europe.

A cross with three circles or discs on each arm in a Christian context represents the Holy Trinity but was probably also copied from earlier Celtic Druidry, where the circles or rings represent the three dominions of earth, sky and sea.

There are several names for this cross, depending on the interpretation. These include Budded, Apostles’, or Cathedral Cross, all implying a religious theme, and Treflée or Botonée in a heraldic context.

In Abrahamic religious art, each arm of a Budded Cross may have one or more buds, three buds being the most common. Each arrangement can suggest different meanings.