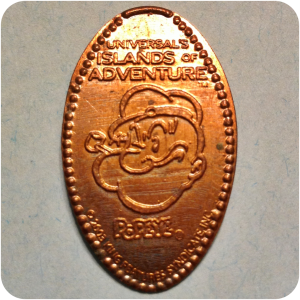 
This circulated coin is uncleaned, shows wear and tear and is pressed on a copper-plated zinc penny.

Universal’s Islands of Adventure®1 is a theme park located in Orlando, Florida. It opened May 28, 1999 as part of an expansion that, along with CityWalk Entertainment District, the Portofino Bay Hotel, and Hard Rock hotel, converted Universal Studios Florida into the Universal Orlando Resort. The park’s overall theme is that of a journey of exploration, where guests depart from a main port to visit six islands, each having its own distinct theme, but all emphasizing adventure.
On June 18, 2010, the seventh island, The Wizarding World of Harry Potter (themed to the popular Harry Potter franchise) officially opened at the park, its largest investment since opening.
Like Universal Studios Florida next door, Islands of Adventure has not limited itself to Universal’s own library. The park has licenced other characters from rival studios, many of whom did not operate theme parks themselves. Some of these include The Cat in the Hat (Dr. Seuss Enterprises), Harry Potter (Warner Bros.), Dudley Do-Right (Jay Ward Productions), Popeye the Sailor Man (Paramount Pictures) and Spider-Man (Marvel Comics, part of The Walt Disney Company).

A mix of of Penny Collector hand crank machines and Eurolink electric machines.

Set sail for uncharted hilarity as you help Popeye the Sailor Man2 rescue Olive from the clutches of that big blowhard Bluto. Brave white-water rapids as this twisting, turning raft ride makes you wish you’d have brought your spinach… and a towel.

Popeye the Sailor Man3 is a cartoon fictional character created by Elzie Crisler Segar, who has appeared in comic strips and theatrical and television animated cartoons. He first appeared in the daily King Features comic strip Thimble Theatre on January 17, 1929; Popeye became the strip’s title in later years.

Although Segar’s Thimble Theatre strip was in its tenth year when Popeye made his debut, the sailor quickly became the main focus of the strip and Thimble Theatre became one of King Features’ most popular properties during the 1930s. Thimble Theatre was continued after Segar’s death in 1938 by several writers and artists, most notably Segar’s assistant Bud Sagendorf. The strip continues to appear in first-run installments in its Sunday edition, written and drawn by Hy Eisman. The daily strips are reprints of old Sagendorf stories.

In 1933, Max and Dave Fleischer’s Fleischer Studios adapted the Thimble Theatre characters into a series of Popeye the Sailor theatrical cartoon shorts for Paramount Pictures. These cartoons proved to be among the most popular of the 1930s, and the Fleischers—and later Paramount’s own Famous Studios—continued production through 1957. The shorts are now owned by Turner Entertainment, a subsidiary of Time Warner, and distributed by sister company Warner Bros. Entertainment.

Over the years, Popeye has also appeared in comic books, television cartoons, arcade and video games, hundreds of advertisements and peripheral products and a 1980 live-action film directed by Robert Altman that starred comedian Robin Williams as Popeye.