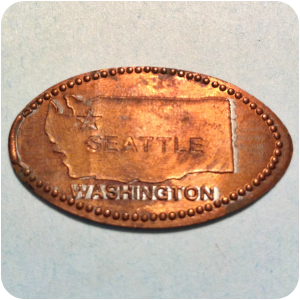 The Center House at Seattle Center1 is undergoing a major renovation and the machines are no where to be found. Unknown if the machines will return after the renovation.

Both machines were in front of the Pizza Place.

The stately building, newly named Seattle Center Armory,2 continues to serve generations of visitors — updating its physical space and peeling back the thick Armory walls to reveal its historic roots. The “Center of the Center” now features fresh, local foods and beverages and Seattle’s Best Damn Happy Hour. Taste the new savory and sweet offerings, stay for the many cultural celebrations and take in the sights and sounds of Seattle Center on the new 60-foot outdoor deck. The Armory (main floor) is also home to customer service and Seattle Center administrative offices.

The Seattle Field Artillery Armory, built in 1939, has stood the test of time, evolving over the many years as a community gathering place and affordable family destination. Originaly built in 1939 as the old Armory Building. It housed the 146th Field Artillery and its half-ton tanks. The basement of the Center House still has markings from the old firing range and an unfinished swimming pool intended for the recruits. In 1941, Duke Ellington played on stage for the University of Washington’s Junior Prom.

For the 1962 Worlds Fair, the Armory was reconfigured into the first vertical shopping mall, called the Food Circus. It just pre-dated Northgate Mall, which was the first indoor mall in the United States. In the early 1970’s, the Food Circus was renamed Center House after some minor renovations. In 1985, the Children’s Museum moved into the first floor of the building and expanded their space in 1995, building a giant toy mountain for the newly created Kenneth and Maureen Alhadeff Exhibit Center. At the same time, Center House was renovated and reconfigured to emphasize public programming, such as signature events, free family entertainment and cultural festivals. In December 2000, the Kennedy Center designated the Center House Stage as an Imagination Celebration National Site, only the fifth location in the nation to be designated. Today, over 3,000 free public performances occur in Seattle Center Armory / Center House each year.

Washington3 is a state in the Pacific Northwest region of the United States located north of Oregon, west of Idaho, and south of the Canadian province of British Columbia on the coast of the Pacific Ocean. Named after George Washington, the first President of the United States, the state was carved out of the western part of the Washington Territory which had been ceded by Britain in 1846 by the Oregon Treaty as a settlement of the Oregon Boundary Dispute. It was admitted to the Union as the 42nd state in 1889.

Washington is the 18th most extensive and the 13th most populous of the 50 United States. Approximately 60 percent of Washington’s residents live in the Seattle metropolitan area, the center of transportation, business, and industry along the Puget Sound region of the Salish Sea, an inlet of the Pacific consisting of numerous islands, deep fjords, and bays carved out by glaciers. The remainder of the state consists of deep rainforests in the west, mountain ranges in the west, center, northeast and far southeast, and a semi-arid eastern basin given over to intensive agriculture. After California, Washington is the second most populous state on the West Coast and in the Western United States.