The site is appropriate for children and is a mix of education, where did the hobby originate, to encouraging elongated coins as a new hobby.
The website is nearly finished.

ECM will provide the following to the General Public:

TEASER: Click on My Gypsy to see the teaser page.

In the mean time please visit The Elongated Coin Museum’s curator Kyle Greer on eBay where he offers a fantastic selection on smashed pennies in his eBay store! 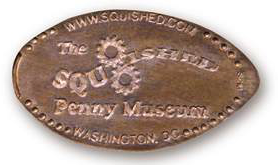 The Washington DC Elongated Coin Museum is CLOSED. Christine Henry and Pete Morelewicz, the curators had been running the Squished Penny Museum out of their home in Washington, DC for a very long time (1996-2007). They were great hosts who loved entertaining visitors and their web site had awesome info and trivia as well!